Congratulations to basketballer Tayla Brazel of Seymour College on being named the 2021 IGSSA Sportsperson of the Year. 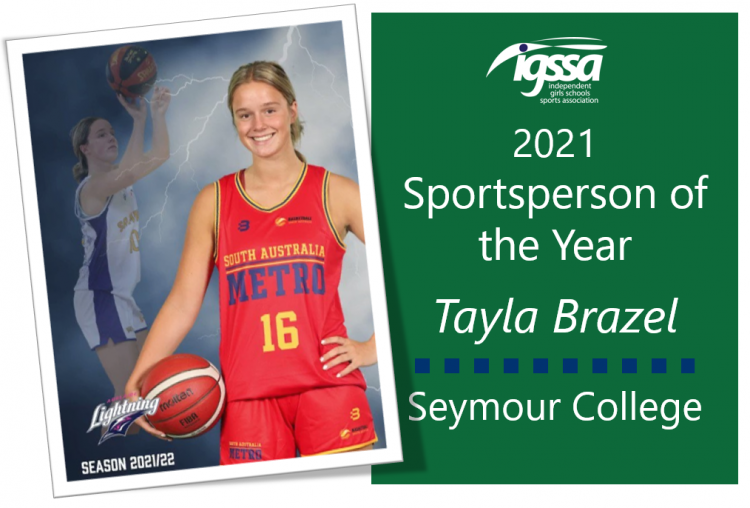 Tayla is Seymour’s Sports Captain, a coverted position responsible for leading the culture of sport at Seymour. Tayla has outstanding athletic ability and is the MVP of the Open A Basketball Team. In 2021, she also participated in netball, athletics, and swimming for her school.

Tayla is a member of the NBL1 Team, Sturt Sabres, where she was awarded the Laura Hodges Perpetual Trophy for most potential up and coming youth.

In 2021, Tayla was named as a WNBL development player for the Adelaide Lightning.

Tayla’s leadership skills were re-enforced when she was elected as captain of the SA U18 basketball team. She led her team on the stats sheets, leading the U18 National Championships in scoring with 22.75 points per game and featuring in the top 5 at the tournament for steals per game, 3-point shots, and free throw percentage.

As a result of her solid performance at Nationals, Tayla was selected in the 2021 U19 Australian Gems basketball squad.

Outside of playing, Tayla works at Port Noarlunga School coaching Reception to Year 7, and coaches at U14 camps at her district club.

Tayla trains on-court every day in some capacity, and additionally does strength and conditioning sessions twice per week. She can also be found using the shooting machine at 7am in the Seymour Gym once per week.

The IGSSA Sportsperson of the Year was first introduced in 2011 and has become one of the most anticipated awards in girls school sport in South Australia.

Each of our 10 member schools nominates an athlete for the Sportsperson of the Year. The 10 Sports Coordinators and the Executive Officer vote for the winner on 3, 2, 1 basis.

The award winner will be an individual athlete who has achieved outstanding results in respect to their performances at an international, national, and/or state level in the last 12 months. The athlete must have participated in IGSSA sport, and consideration is given to additional factors such as recognition in their school in leadership roles, and their contribution back to the school sport community.

The first ever winner of this award was Margaret Gayen of St Peters, an outstanding track and field athlete who still today holds an incredible 13 IGSSA athletics records in long jump, triple jump, and hurdles. Just 3 years after graduating from St Peters, Margaret represented Australia at the 2014 Commonwealth Games in Glasgow, where she was a finalist in the Long Jump and the 4 x 100m relay.

Out of Immanuel, 2012 winner Emma Checker is a current member of the Australian Women’s Football Team, The Matildas. At the age of 25, Emma is considered a young veteran of her sport, with an extensive CV, including stints with professional clubs abroad in South Korea, France, and Iceland. Emma’s proud father Tony is an IGSSA Life Member.

2020 winner and multi-sport athlete Jessie Keech from Concordia committed to US College Indian River State in Florida for her sport of softball, as did 2019 winner Gabi Vidmar of Immanuel, currently in her sophomore season playing basketball at California State Fullerton in Orange County.

2013 winner Steph Trzcinski from St Peters Girls completed a highly successful 4-year stint as a pitcher with US college Cal Berkley in the prestigious Pac-12 Softball Conference, and is now back in Adelaide, still playing the game locally and nationally.

Three National League Netballers have been recipients of the IGSSA Sportsperson of the Year, including current first team players from the Adelaide Thunderbirds Georgie Horjus (2018) and captain Hannah Petty (2015), both from Immanuel.

IGSSA proudly claims a small stake in the sports journey of our 10 previous winners, and we look forward to following the successes of Tayla Brazel as the 11th recipient of our award.